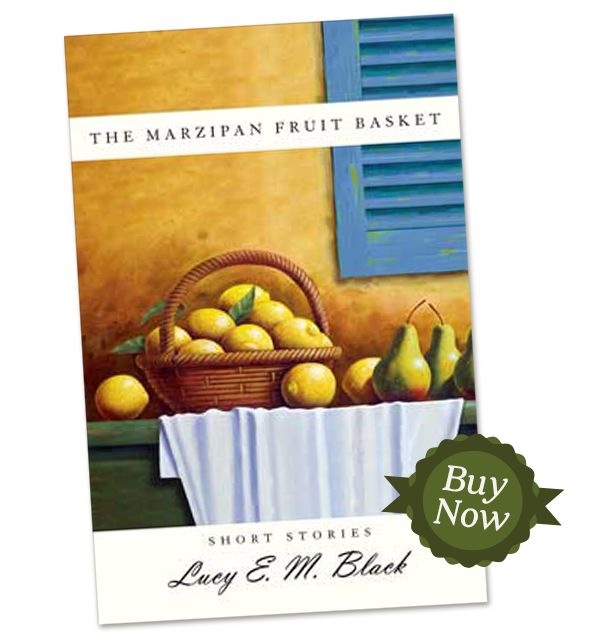 The stories in this collection are unified by a sense of dislocation. In each of the pieces, there is an underlying element of disturbance and disharmony. Resolution threads its way through the narratives while the characters struggle to navigate conscious choices and come to terms with new realities.

A perspective that views the complexity of life journeys as a manifestation of intentional decisions, circumstances beyond one’s control, and the need to reflect upon the combination of both in order to become fully realized, drives the narrative voices.

Get your copy today!

Want to find out where you can buy The Marzipan Fruit Basket? Available now in stores and online. Click here to learn more.

Is The Marzipan Fruit Basket your Book Club’s next read? Download a list of great discussion questions for your group.

“Water don’t always quench a deep thirst,” speaks one of her characters, but Lucy E.M. Black’s characters are a fresh drink of water in all their complexities. This collection is a glass brimming full with heartfelt narratives of people piloting through the denseness of life. Beautifully dark and light and honest and deep in the vulnerabilities we dwell in and share. A charming and gifted new voice in the growing landscape of Canadian literature.”

“There will be no need for an editor to red-line superfluous text in Lucy Black’s debut story collection, The Marzipan Basket. Stories drive in a straight-line narrative, drawing, pulling, the reader into an emotionally epiphanic event in the life of the protagonist, often interwoven with that of an I-narrator and, with strong images, revealing a depth of feeling you will recall and relate to from your own experience. Ever-present in the lives of the characters are the pain and consequences of abuse, cruelty, indifference, abandonment, loss and loneliness, struggle, poverty, and love. These stories reflect moments in time; slices-of-life to which there are no resolutions; in this, author Lucy Black trusts her readers to envisage their own coda.”

—Rhoda Rabinowitz Green, author of Slowly I Turn, Moon Over Mandalay, and Aspects of Nature

“Lucy Black arrives into the world of Can Lit with this compilation of beautifully written short stories that speak to the heart-felt intimacies of both her characters and her readers.”

Excerpt from The Marzipan Fruit Basket

I had been promised an adventure: a nice train ride, a visit with Tante Edda, and a trip to the sea. This wasn’t a nice train ride. My mother was acting strange. I didn’t like it. “When can we go home?” I asked her. “I miss everyone.” I didn’t want to go home particularly but I had discovered that this question was a way to get attention. Usually it made her circle me with her arms and smooth my hair, and tell me what a good kind I was.

“Not yet,” she answered crossly. “We have things to do first.”

This was not the expected response and I began to cry. Little tears.

“I am home,” she said, “this is my home. Don’t you want to be here with me? We’re going to the sea. You will meet Tante Edda who I love very much. She has a big house near the sea. She had a little girl once named, Maartje.”

“That’s a stupid name,” I said but then because my mother looked so annoyed by my response, I continued, “tell me about Maartje, what happened to her?”

And my mother began the story of Tante Edda and Ome Hendrik, and Maartje and the terrible time near the end of the war when there was nothing to eat but herring and shrimp and no eggs and no vegetables because the soldiers had taken everything, and how Maartje became weaker and weaker and her little legs became so thin that she couldn’t stand on them and had to lie down on the bed all day long, and how she just faded away and died and there was nothing to be done. And I fell asleep while she was talking and when I woke up she was shaking me and the train was stopping.