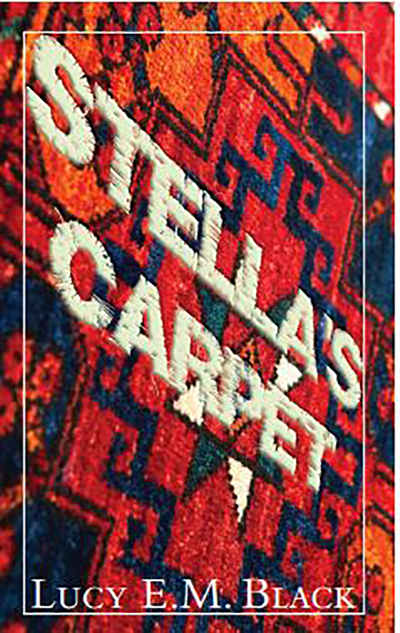 A Holocaust survivor and a woman briefly imprisoned during the Iranian Revolution are among the characters in this story. Experiences overlap, as individuals step outside the shadow of their own histories and make conscious decisions about how they choose to live while forging new understandings of family, forgiveness and reconciliation.

Stella’s Carpet struggles to document a lived experience within the context of broader questions such as: how do we survive the unimaginable? How do we live with the secrets of our past? And, at what price, love? This book will appeal to readers of fiction who, like all of us in contemporary society, are being forced to find non-traditional ways to create community and to examine the threads that draw us together.

“Stella’s Carpet is a treat—a multi-national, multi-generational
gem of a novel about family, loss and the ties that bind. Lucy Black writes with heart, verve . . . and oodles of talent.”

Story behind the book:

Both of my parents survived the devastation that took place in Poland and the Netherlands during WWII. Much of my understanding of the history of the period, and the horrors that destroyed human lives, was initially learned from them. The concept of intergenerational trauma is something that I have found deeply interesting and helpful as I have endeavored to understand the consequences, to them and to others, that are the direct result of such life-damaging experiences. We live in a country that, with the exception of indigenous-settler relations, is shielded from such atrocities. As newcomers join our ranks from war-torn homes and places of persecution, we need to understand that they carry with them a deep and lingering pain that may well be carried on into the lives of their children as they grow up under the shadow of such fear and hurt. Openly embracing these newcomers and welcoming them into our lives and families has become a vital expression of our own humanity. Stella’s Carpet ambitiously attempts to portray some of these things, with the carpets themselves standing in as a beautiful way to broach some of the issues.

– Tenderly explores the quirkiness of a loving blended family dynamic with all of its inherent messes and drama. An ex-son-in-law continues to share a close intimate bond with his former in-laws while his ex-wife reunites with a childhood love and transforms from a bitter hypochondriac to someone who can re-engage with life. Their daughter navigates between her parents while trying to establish her own life trajectory.

– Persian carpets are beautifully detailed and serve as significant markers in the characters’ lives. One of the main characters collects Persian carpets and his growing collection is described in detail. A great deal of information is introduced about the splendour, provenance, symbolism and history of carpets.

– The intergenerational consequences of trauma is explored through several narratives: two Holocaust survivors share pieces of their history, while the experiences of those who survived regime change during the fall of the Shah in Iran are touched upon. An unhappy woman reveals the effects of second-generation trauma on her own life.

– This is a story of newcomers to Canada and the choices made in order to flee from difficult circumstances before transitioning to new lives in Canada. Their resiliency and bravery is highlighted, even as we are exposed to some first-hand accounts of their horrifying ordeals.

– Many historical events in WII are detailed from the perspective of a young man taken prisoner at the outset of military incursions, and a young woman trying to evade capture by invading forces. Their poignant stories are carefully drawn to highlight the life-long effects of such terror.

An Excerpt from Stella’s Carpet

Stella was often lonely. There were men on staff who would happily buy her a beer on a Friday night. There were women on staff who would easily include her in their lunches and trips to the mall. She knew this. She knew it was something in her that kept her aloof and frightened. Students sometimes asked her to supervise a dance or help out with a club. She would agree, tentatively, but then find it necessary to fabricate an excuse. Intimacy often seemed overwhelming.

One Friday night, Stella found herself driving to Toronto. As a pretext for missing a school social that evening, she’d told her department head that she had an engagement there. She couldn’t afford to be seen in Waldham, and so made herself go to the city to spend the evening alone. She drove to the Beaches and found a side street to park her car. Walking along Queen Street, she window-shopped at leisure.

The vivid colours of a toy store caught her attention. Oversized giraffes were grazing in the front window. A miniature fire truck and Jaguar were parked outside the door, carefully chained to a steel post. Stella walked inside. The bright yellow lighting was intense and she blinked as she became accustomed to the glare. The place seemed chaotic. Loud children’s music of some type was playing. Balloons and stuffed animals dangled from the ceiling. There were no clear sightlines and no defined aisles to walk along. She stepped carefully to the right, past bins of beach balls and bubble-blower. Moving forward slowly, she turned her head, looking for a display of children’s books or teaching materials. She walked past play centres with blocks, past a section of baby toys, past a whole wall of games. She strolled on through the store, amazed at the proliferation of offerings.

Gauze-like material in shimmering pink, purple, and blue was suspended from a nearby corner. Stella moved towards it. As she drew near, she saw that little figures were hanging from the ceiling, swaying slightly amid the coloured gauze. Intrigued, she quickened her step and found herself standing beneath a gossamer tent filled with marionettes. It was mesmerizing. Goats from The Sound of Music were suspended overhead. She touched them and saw that their legs were jointed, allowing for movement and dance. Along with Disney characters—Mickey Mouse, Donald Duck, Goofy—were princesses, all of them beautifully painted, with exquisite detailed costumes and carefully arranged hair.

Stella was enchanted. She stood below the cloud of tiny figures and tapped them gently, urging them to dance for her. They seemed full of life and vitality. And then she saw Pinocchio. He was brightly painted in primary colours and had a little leather hat and leather shorts. But the clever thing was that his nose was a removable dowel. In a tiny plastic bag stapled to his shorts was a second nose, a longer nose. The nose that grew when he told lies. It could be twisted in when the short stub nose was taken out. Stella took it down from the hook instinctively, without thinking. Holding the wooden crosspiece in her hand, she read the cardboard tag: this marionette had been hand-crafted in Quebec with hand-stitched clothing. Pinocchio could be hers for the princely sum of one hundred and thirty nine dollars and ninety-nine cents. It was a ridiculous amount of money for a toy. But it was Pinocchio, and he was smiling at her.

She walked to the front and found a clerk dressed in red overalls. She handed
over her Visa card. Minutes later, bright yellow bag with blue tissue in hand, she left the store carrying her new love. This wasn’t the sort of thing Stella typically did. She’d buy herself clothes and shoes for work, but mostly she saved her money, and never spent impulsively. Placing the bag on the front seat of her car, she tried to rationalize what she’d done.

All of us have a story, and our stories are often informed by family history. Families are frequently messy and there may be multiple ways of understanding experiences and narratives within a single family unit. The influence of the past upon the present is something that continues to be manifested in all of us. Stella’s Carpet endeavours to chronicle the complexities of a family, and to demonstrate the connections between individuals who are attempting to reconcile the past with the conscious decisions made about how they choose to live.